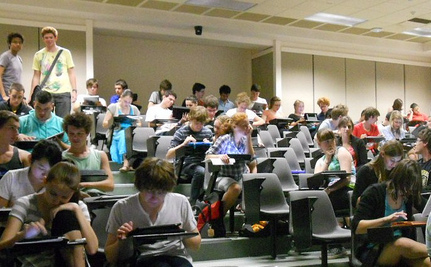 How will Steve Jobs stepping down as Apple’s CEO affect higher education? As the Chronicle of Higher Education observes, Jobs has “long sought the advice of higher-education officials and encouraged colleges to use the company’s technology in new ways for teaching and research” by consulting with university officials and personally inserting himself in Apple’s education strategy. While PC’s were once the dominant computer on campuses, Apple — largely thanks to the popularity of the iPod and iPhone — has become much more of a presence at colleges and universities.

I remember buying my first Apple computer — my first computer — in 1988 while in college. I worked for an “alternative” newspaper at my university and we used Apple computers precisely because of their design capacity (all those fonts). Though the Macintosh SE I lugged back to my dorm room cost a bit more than a gray IBM-type machine, it seemed worth it, especially after I became an editor at the paper. My university had computer labs stocked with Apples (and with IBM computers running DOS). But at most of the universities I’ve since studied and taught at, Dells and the like have been the norm until recently with the rise of the iPod, iPhone and iPad.

Early on, Apple started the Apple University Consortium (now called University Executive Forum) which was comprised of top university officials who were given an early view of Apple’s products and a chance to influence design:

Martin Ringle, chief technology officer of Reed College [which Jobs briefly attended without earning a degree], remembers being at a meeting about 10 years ago when Mr. Jobs gave officials a sneak peek at the iPod.

“People around the table said, Well, what does that have to do with higher education?” Mr. Ringle remembers. “He said, ‘Use your imagination. It probably has lots of things to do with education. That’s what you’re here for.’” Several universities experimented with iPods, which led Apple to create a free service for colleges called iTunesU, designed to store and stream audio and video files for university courses and make lecture recordings available to the public.

But after Jobs was forced out of Apple in 1985, Apple faltered and higher education was no longer a priority. Jobs went on to found a company called NExT which made high-end computers for research. By the time he returned to Apple in 1997 and restored the education advisory board, the company’s Apple’s market share in education had “fallen dramatically.”

At about that time, I interviewed Mr. Jobs about whether he thought the company could make a comeback in education, where its market share had fallen drastically. He expressed frustration with what he saw as the negative tone of the questions.

“It doesn’t keep me up nights,” he said. “What keeps me up nights is, How do we make the best stuff? I think that Macs will be the coolest computers for kids in another year or two, and I think that’s very important. And I think that we’re going to definitely see stabilization and then improvement.”

Though many in higher education were skeptical at the time, he pulled it off.

Apple computers do carry a higher price tag than other brands; even with an educational discount they’re beyond the reach of many of my own students. But it’s rare to see a student without some kind of iPod (and an earbud perpetually attached to one ear). More and more of my students (at a small urban college in Jersey City) use their iPods and iPhones (and Blackberries) to take notes and to store electronic versions of books. Podcasts with professors’ recorded lectures now seem commonplace.  I use a WordPress blog that loads easily onto iPhones and other devices for all my courses; students can find the syllabus, homework and essay assignments, links to online readings and informative websites, videos and much, much more. The students’ attachment to their iPods, iPhones, etc. is a very positive development — a student might forget a book, but never his or her phone (especially if it has her or his music on it!) so there’s no excuses for not having the homework or, in some cases, the textbook.

Apple has insisted that things will be “business as usual” following Jobs’ resignation, notes the New York Times. I’m hoping this is not an empty statement. It’s thanks to Apple’s innovations that, in small ways and large, learning and teaching are a different and better business than they used to be.

Bron: Kristina Chew teaches ancient Greek, Latin and Classics at Saint Peter’s College in New Jersey. Since 2005, she has been blogging about autism, disability, and education, previously at Autism Vox. She also writes We Go With Him (autism.typepad.com) about life with her teenage son Charlie.

You create your own reality